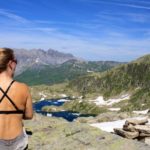 “Perched at 2032m of altitude on the slope of Les Grands-Montets, just below the tip of the Glacier d’Argentière, is the classic stone Chalet Refuge de Lognan, which dishes up the best food to be found on this mountain, whenever the Lognan cable car is running.

Access is somewhat off-piste, which adds to this traditional refuge’s charm: you can ski to it either from the Herse chairlift or via the Point de Vue run that follows the glacier from the Aiguille des Grands-Montets cable car. In summer, the walk from the Croix de Lognan, through mountain flora and crossing glacial streams, has stunning views of the village of Argentière below the moraine of its mighty glacier.

The refuge is run by a local high mountain guide who is the grandson of Armand Charlet, one of France’s most celebrated alpinists of the 20th century. The restaurant specialises in traditional Savoyard mountain cooking, which keeps the fare simple and delicious.”